A costly mistake made by NFT enthusiasts

Last year the long-awaited movie “Dune” based on Frank Herbert’s novel of the same name was released. Over the years, the story of the Atreides has been translated into a miniseries and computer games, but not all the planned projects have been realized. 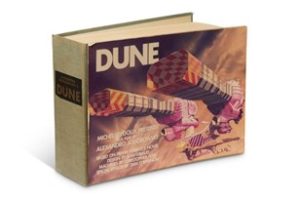 In 1974, a French consortium acquired the rights to make a film about Dune, which was to be directed by Alejandro Jodorowsky. The director created a book that included a screenplay and concept artwork while preparing for the planned 14-hour film. The idea for a film adaptation was ultimately rejected because the budget was too high, but Jodorowsky’s book has become a legend among fans of the novel. Late last year, one of its rare copies went under the hammer at Christie’s auction house in London. The auction house estimated that the copy would fetch between twenty-five and thirty-five thousand euros. However, the price exceeded expectations by as much as three times.

The auction was won by a group dealing in NFT (non-fungible tokens) – Spice DAO. DAO stands for Decentralised Autonomic Organisation. It is a digital form of organization where there is no single responsible entity. The group spent about €2.66 million ($3.04 million) on a copy of the production book, in the mistaken belief that its acquisition would also put them in possession of the copyright to the novel.

Before spending the $3 million, the group via Twitter indicated their plans for the book, consisting of:

The idea is interesting, but with a few major hurdles. First, the Spice DAO only bought a copy of the book, not the copyright necessary to create an animated series based on Frank Herbert’s novel. The rights to film and series adaptations of Dune were acquired by Legendary Pictures in 2016, and a film directed by Denis Villeneuve premiered last year. Second, Jodorowsky’s book is already publicly available for viewing on Google Photos.

The group backtracked on its Twitter statement, saying that it never believed that owning a copy of the book was equivalent to owning copyright with accompanying rights to reproduce the work in NFT form. However, the incident has already garnered media attention. Although the Spice DAO still does not own the copyright to produce an animated series based on Herbert’s novel after spending the dizzying sum of $3 million, it has undoubtedly gained publicity from the mistake that will perhaps influence its success in the future.