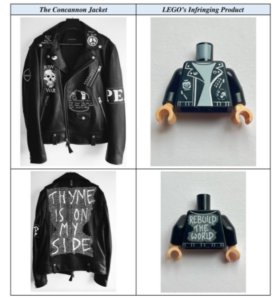 Source: US District Court of Connecticut

A leather jacket worn by Queer Eye star Anthony Porowski has been at the center of a copyright infringement lawsuit after Lego created a toy version of the TV personality wearing a confusingly similar piece of clothing.

Porowski appeared in the fourth season of the Netflix entertainment show wearing a leather jacket designed by James Concannon. The front of the jacket features, among other things, a skull, a pacifier, and fists breaking chains, forming a hoop. On the back, we can see the words “thyme is on my side” in graffiti style. 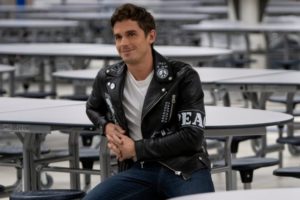 Last fall, Lego released a Queer Eye toy set featuring miniature versions of the five stars of the series. One of the items available was a leather jacket with graffiti-style graphics. The back of it reads “rebuild the world” in dripping white font on a gray background, which is reminiscent of Concannon’s design in style and layout. On the front, we see markings such as a Lego skull and a pacifier, also referencing the show’s leather jacket.

In a lawsuit filed in December, Concannon claims that Lego “meticulously copied not only the individual creative elements of the jacket, but also the unique placement, coordination, and arrangement of the various artistic elements.” The jacket was designed by Concannon in 2018 specifically for Porowski. The design was copyrighted in November 2021. The lawsuit states that it was “created using a plain black leather jacket that Porowski sent to Concannon, to which the designer added his original artwork, composing and arranging each artistic element to reflect his distinctive aesthetic.”

Concannon accuses Lego of copying his jacket without permission or compensation. The artist maintains in the lawsuit that he would not consent to a company as large as Lego commercially using his work for free. He also claims that Lego initially offered him a free Fab 5 Loft set – which costs $99.99 – for his six-year-old son to play with, instead of compensation, only to later rescind the offer, telling him that Lego does not give away its products for free.

Lego’s lawyers also claimed that “by giving the jacket to his friend Porowski, knowing that he would wear it in Queer Eye, Concannon granted an ‘implied license’ to Netflix to use the jacket in any way it wanted – including sublicensing the work to Lego.”

Concannon has filed a lawsuit seeking monetary damages for “all damages he suffered and for any profits or gains made by Lego.”  If the lawsuit turns out successful for him, the compensation will certainly be more valuable than the Lego set offered to him for less than a hundred dollars.