What game is Russia playing with the intellectual property of the Western world?

The war in Ukraine is an unimaginable tragedy for our Ukrainian neighbors. Intellectual property issues are certainly receding into the distant background. Nevertheless, in light of the numerous publications on this topic, we would like to organize and present the key issues concerning the current situation of intellectual property rights owners in Russia. The incoming information is often contradictory, resulting in certain information chaos.

The most important information is that the rights previously registered in the Russian Federation remain in force. So far, the authorities have only threatened to nationalize them. Such a move, if it comes to fruition, will be a repercussion of sanctions imposed by many countries on Russia and the exit from the Russian market of many reputable companies such as IKEA, Mcdonald’s, Apple, and Samsung. The 47 “unfriendly countries” on Russia’s list include EU member states, Australia, the USA, Canada, and Japan.

The case of Peppa Pig, which has become so famous in recent days, is also not always reliably presented in the media. The lack of copyright protection of the fairy tale and trademarks depicting the image of the character, as mentioned by many websites, is not due to any legal act, but to a court judgment in a case that has been pending since September 2021 between the owner of the Peppa Pig trademark (Entertainment One) and a Russian businessman, Ivan Kożywnikov, who copies the image of the serial character. 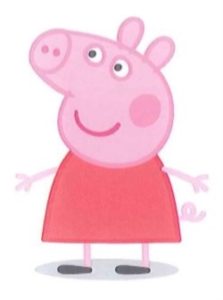 One of Entertainment One’s trademarks in Russia (819421)

The court denied protection to the owners of the popular cartoon and ruled that they should not be compensated for the entrepreneur’s actions due to alleged trademark abuse. The judgment was undoubtedly influenced by the current world situation, as the Court based its ruling on “hostile actions by the United States of America and related foreign countries”.

The web has seen a rash of trademarks allegedly filed in Russia that are highly similar to those of brands that have withdrawn from the market there. Most of these reports turned out to be false, except for an alleged successor to McDonald’s – Uncle Vanya (Russian: Дядя Ваня, Diadia Vanya). 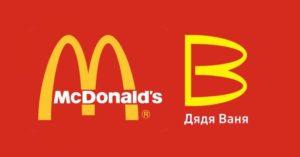 The application actually went to the Patent Office of the Russian Federation, but it has already been withdrawn. Nevertheless, there are reports that the first Uncle Vanya restaurants, which will replace Mcdonald’s, are ready to open.

Significant changes have occurred in Russian patent law – as the possibility of claiming damages for infringement of patents (but also utility models and industrial designs), the holders of which are associated with so-called unfriendly countries have been excluded, in fact, its amount has been set at 0 percent of the profit from conducting such activities.

The following is an excerpt added to the decree “On Approval of the Methodology for Determining the Amount of Compensation to be Paid to the Patent Holder in the Case of a Decision to Use an Invention, Utility Model or Industrial Design without his Consent, and the Mode of Payment of this Compensation”:

“With respect to holders of patents associated with foreign countries who commit hostile acts against Russian legal entities and individuals (including, if such patent holders have citizenship of such countries, their place of registration, place of pre-judicial business activity, or place of their pre-judicial profit from such activity are such countries), the amount of compensation shall be 0 percent of the actual income of the person who: “has exercised the right to use the invention, utility model or industrial design without the patentee’s consent, from the production and sale of goods, the performance of work and the rendering of services for the production, performance, and rendering of which the relevant invention, utility model or industrial design was used.”

At this point, any information about Russia’s complete abandonment of the protection of intellectual property rights belonging to persons affiliated with unfriendly countries, except for patents on the invention in the above scope, remains uncovered. We will keep abreast of the Russian Federation’s actions in this regard and report on any changes in the law.