In the judgment of 8 September 2020 the Court of Justice of the European Union clarified the criteria for assessing a distinctive character of positional marks.

The case concerned trademarks applications filed by Aktiebolaget Östgötatrafiken, a Swedish transport company, which represented coloured ellipses placed on vehicles in a specific place, as shown in the table below. A shape of the vehicles was not covered by the application. 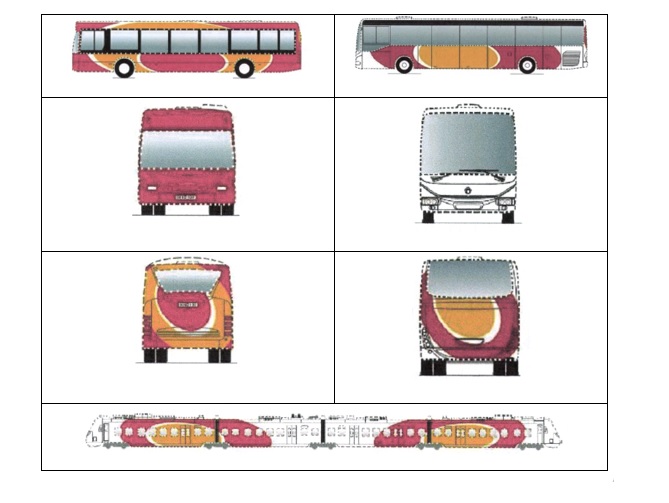 The Patent Office (Swedish) refused to register the above-mentioned trademarks. It considered that the signs at issue can be regarded as an indication of commercial origin if they deviate sufficiently from the norm or customs of the economic sector in question, which the applicant failed to demonstrate. The court examining the appeal against the decision shared the same opinion.

The Court of Appeal noted that in a previous case law the above-mentioned requirement was referred to three-dimensional marks, which were at the same time the shape of the goods. Customers are not accustomed to assume what the origin of the goods is, based on their shape or packing. Therefore, in the opinion of the Court of Appeal, the above-mentioned requirement to sufficiently differ from the norm or customs of the relevant economic sector does not have to apply to the positional marks the registration of which was requested by Aktiebolaget Östgötatrafiken.

The Court of Appeal therefore asked two questions concerning the interpretation of Article 4(1)(b) of Directive 2015/2436:

In response to the questions the CJEU stated that the distinctive character of positional trademarks should be evaluated taking into account the perception of the relevant public, without the need to examine, whether the trademark deviates in a significant way from the norm and customs of the relevant economic sector. It is, therefore, crucial to examine, whether the sign can fulfil the basic function of a trade mark, which is to indicate the origin of the goods or services, and this issue is assessed in concreto in each case under consideration, taking into account the perception of the sign by a relevant public. This assessment should also take into account the fact that the designations are placed on objects which are only a carrier of the mark and not goods for which the trademark is applied for. According to the CJEU if this analysis shows that the designations on transport vehicles enable an average consumer to distinguish the transport services provided by this company from those provided by other undertakings the mark has a distinctive character.

The above-mentioned issues are important in the context of the new regulation contained in Article 4 (1) (e) of Directive 2015/2436 (accordingly Article 1291 item 1 point 5 Act of 30 June 2000 Industrial Property Law), which deals with so-called functional obstacles to registration. Prior to the amendment, trademarks constituting the shapes of goods that perform certain functions were excluded, i.e.:

They could not become trademarks even if they acquired the so-called secondary distinctiveness. This was the case, with the following:

Nowadays, the exclusion from registration also applies to other characteristic of goods, not only their shape. Such other characteristic may be, inter alia, decorative motifs placed on the goods. Taking this into account, one may wonder, whether positional marks, or at least some of them should be considered to as exempted from the registration under Article 4 (1) (e) of the Directive, at least when applied in relation to goods and not services.

It seems, that the said judgment excludes an automatic application of the regulation for positional marks. The distinctive character of such marks will be determined taking into account consumers’ perception. If, in their opinion, certain motifs placed at a certain place on a product will be perceived as indicating the origin of the good/service, and not as a decorative element, they should be assumed to have a distinctive character. Also, it should not be examined whether the appearance of the mark significantly deviates from the practices in a relevant market sector. Positional trademarks do not constitute a product and cover only a part of it, and as such are separate from the product, so on principle cannot constitute a characteristic of a product. We may expect that a relevant jurisprudence based on the new law will follow.